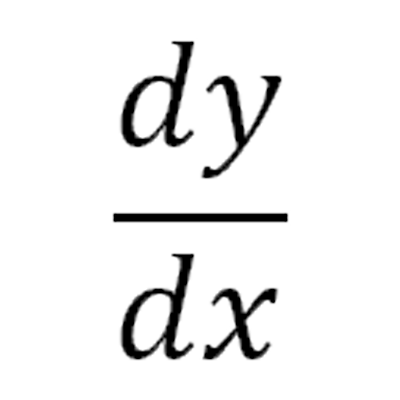 This symbol, dy over dx, represents a derivative.

A Guide to Derivatives and Integrals

Derivatives are the foundation of Calculus and what it can be used for. Derivatives describe the slope of a function at a specific time, and also describe rates of change. This fundamental aspect of calculus allows for slopes and changes to be described better, allow for better optimization, along with many other fascinating uses.

To learn more, go to this page that goes more in depth on derivatives.

Integrals are the other fundamental part of calculus. Integrals describe the area under curves on certain intervals, and can also be used to find area between two functions. When applied to the real world, integrals can describe volumes of three dimensional shapes, average values on a function, and also a multitude of other things.

To learn more, go to this page that goes more in depth on integrals.

This video is the first in a seires of videos by the youtube creator 3Blue1Brown that goes into incredible depth on the basics of calculus. The video goes into detail about both derivatives and integrals, how they work, and what they can be used for, all in an easy to understand way. The rest of the series is similar to this video, but each video focuses specifically on one topic at a time, talking about all of the in's and out's of the topic.